Everything created by nature on this earth has some color and smell. The smell is called “odour” when it is unpleasant and “fragrance” when it gives a feeling of pleasantness. Who doesn’t know the scent of flowers swaying in the gardens, the peculiar fragrance emanating from the trees swaying in the fields and the sweet fragrance rising from the soil after the first shower of rain! Just as every tree, fruit, and flower differs in texture and color, so do fragrances.

It is refreshing to hear the name of the fragrance. The fragrance removes the odour and creates freshness and joy in the mood. The use of perfume has been around in every age. People have always been able to express their feelings and emotions through perfumes. Experts say that any kind of fragrance affects the human personality, mood, psyche as well as his health.

The Relationship between Fragrance and Health

We also see many impressions of the relationship between fragrance and health in our daily lives. For example, Asian culture, when a child or an adult develops measles, neem leaves are placed on the patient’s pillow or at his head. The smell of these leaves prevents the spread of infectious germs. Patients complaining of nausea or vomiting are advised to sniff mint leaves immediately. If the plants or trees in one’s garden start to deteriorate in spite of the right amount of water and fertilizer, then some people wash the frankincense in such cases and the smell of it removes the toxic effects from the atmosphere. Incense is encouraged to be offered in homes where there is a possibility of magic, sorcery or negative attitudes. The scent of frankincense removes the impurities of the house. Due to these properties, the use of frankincense incense is especially important in spiritual healing.

From all these things and the countless everyday events related to it, it is clear that smell or fragrance affects our mood, health and environment.

Considering the health effects of perfume, a treatment called “Aromatherapy” was founded. The term aromatherapy and its treatment were first introduced in the twentieth century, but even in ancient times some scents were used. In ancient times, fragrant flowers such as lavender were placed near the patient’s bed. This would relieve the patient’s depression and give him happiness and increase his immunity against the disease.

Some manuscripts from 1500 BC show that they used certain perfumes as medicine. The ancient Egyptian Pharaohs made mummies with fragrant spices and used these perfumes to treat depression (مالیخولیا).

Fragrance is of special importance in different religions. It has always been used in temples, shrines and places of worship. The ancient Greeks considered fragrant herbs to be a divine gift. When the Babylonians built tombs and temples, they added fragrance to the bricks. Similarly, sandalwood is considered very sacred in India.

Role of Muslim Physicians in Aromatherapy

Regular use of perfumes as a treatment was started by Muslim physicians. The first name among these physicians is Abu Bakar Muhammad Zakariya Al-Razi, who wrote more than 200 books and treatises on medical science. It is said that Hippocrates started medicine, Galen revived medicine, Al-Razi collected and Ibn Sina completed medicine. Ibn Sina (Avicenna) has also offered many remedies for perfumes and their steam.

Once the plague broke out in London during the prime of the British Crown, people started using fragrant paste of oranges and cloves to avoid the stench and infection of the plague. It was observed that people who worked in perfume factories were also protected from the epidemic. After these observations, experts began to seriously consider perfume treatment (aroma therapies).

The term aromatherapy was coined in 1928 by the French chemist René-Maurice Gattefossé. Gattefossé worked in a factory where his hand was badly burned. There was no treatment available at that time. He dipped his hand into pure lavender oil. He was surprised to see that the pain and redness disappeared quickly. Gattefossé said that in a few hours, the skin of his hand healed without any scars. He attributed the cure to the anti-infective properties of lavender oil. He then tried several oils on various skin ailments, some of which he found effective for healing.

After the Gattefossé, French surgeon, Jean Valnet did more research on the subject. Dr. Valnet was a surgeon in the Army during World War II; he treated burns and other wounds with clove, mint and chamomile oils. He also found that certain fragrances can cure mental disorders. So he started using perfumes for mental disorders and insomnia. Then Austrian biochemist Madame Marguerite Maury extracted different perspirations for this purpose. Margaret believed that these perspirations were absorbed into the skin and also cured internal diseases. In the twentieth century, two researchers, Danielle Ryman and Robert Tisserand, worked assiduously on aromatherapy. 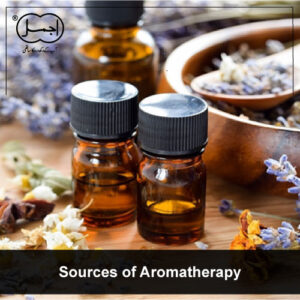 Aromatherapy not only uses smells of perfume but also uses its oils in a variety of ways. Applying oils, massages or scents to the nose affects the muscles and bones and improves the nervous system through the brain. The effects of different fragrances and the scent of different plants are varied. After the scent reaches the nose, the internal organs and nerves of the nose become active and its message reaches the brain through the nervous system. Fragrance molecules affect feelings and emotions in brain cells. For example, the scent of ‘lavender’ calms the mind just like a sleeping pill. Massage of lavender oil on the neck gives relief. It also makes you sleepy. The scent of lavender in the room at night also gives you a good sleep at night.

According to aromatherapy experts, oils derived from plants are used in various ways such as massaging the skin, sniffing, room freshen perfume, adding it to bath water to soothe the brain.

The use of distillation of different herbs is also a part of aroma therapies . These liquids enter the body and naturally eliminate the pain.

Friction creates heat in the body, opens pores and blood circulation becomes faster. Massage is prohibited in some diseases for example, in high fever, skin diseases, fractures, high blood pressure and burns. The method of massage is to make the patient lie down in a comfortable seat. Wash hands thoroughly and apply botanical oil gently on the affected area. It is also not necessary to massage the whole body. Massage is usually more effective for various ailments.

The use of perspiration during bathing has been going on for centuries. It has a pleasant effect on nature. It relieves many types of pain. The method is to fill the bathtub with water and add a few drops of botanical oil and sit in this water for fifteen minutes. If the water is slightly warm, it gives better results. Bathing with neem leaves in lukewarm water is also a very healthy bath.

This method is also called steaming. This method is very useful for cleansing the skin, eliminating lungs and throat problems. Put a few drops of the desired perspiration in a pot of boiling water. Put a towel on your head, close your eyes and let it steam through your nose for two to three minutes. Inhale through the nose for nasal problems and inhale through the mouth to relieve a sore throat. 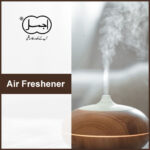 Dissolve a few drops of perfume in a cup of water and put it in a bottle with many small holes on the lid. Through these holes, this fragrance permeates the atmosphere of the room. Put the eucalyptus leaves in a bowl and add some vinegar in it. After three weeks, take out the eucalyptus leaves from it. Now fill this solution in an open mouth bowl and keep it in the room. This is an excellent natural air freshener that will create an atmosphere of freshness and cleanness in the room. 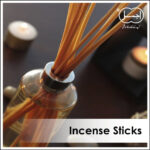 Incense sticks are commonly available in the market. They are helpful in keeping the atmosphere pleasant and clean. The incense sticks can also be made to suit your needs. If there is a problem in this, then buy regular incense sticks available on market, put two drops of perspiration on it as desired and dry it in the sun and then use them. An even easier way is to put botanical oil in a lamp and light it. Camphor or varieties of other perfumes are also available in the form of oils and leaves which are burned or “fumigate” in the rooms. The ancient method of fumigation is a type of aromatherapy.

Aroma therapies mostly treats stress, depression, mood swings, and physical pain. A team of experts at Saitama University of Japan has noted that since ancient times, people have not only been able to get rid of stress and anxiety by sniffing the fragrance of certain plants, but also by using these fragrances to relieve their physical inflammation. They also alleviated clutches of depression and stress with the use of these fragrances, even the scent of flowers and fruits takes them to the valley of deep sleep.

The Marjoram plant, if planted indoors, can repel mosquitoes, flies and other insects. When you come home from the office, tired or having fun or playing sports or feeling tired and stretched your muscles from daily activities, take a bath or steam by adding two drops of Rosemary oil and two drops of Pine oil in lukewarm water. You will feel refresh and happy. 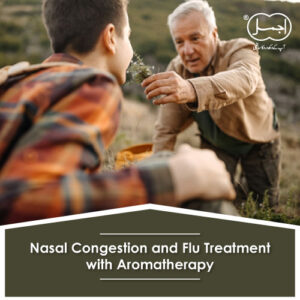 The remedy for nasal congestion and flu is to pour hot water into a pot and add two drops of peppermint and three drops of white eucalyptus in this boiling water and wrap a towel around the head. Place the pot inside a cloth sheet, place the mouth on top of the pot, and inhale through nose and exhale through the mouth. Do this for five minutes. The closed nose will not only open, but also the heaviness of head and body tension will disappear.

People with heavy flu and COLD problems with chest tightness all the time have difficulty in breathing, especially people who have a tight chest, should take hot water in a pot and put ten drops of eucalyptus oil and ten drops of lavender oil in it. Take the steam of that water as mentioned above.

Men and women who have high blood pressure or asthma problems should only do this after consulting their doctor. In winter, steaming with hot boiled water is necessary and useful for chest and nose problems. It also helps alleviate the high blood pressure levels and stabilizes it to normal ranges. Regularly steaming can also help clean facial skin.

Feeling tired in the hands and feet. Fingers and ankles are especially noticeable after a workout. In such cases, it is useful to take a few drops of Essential Oil and mix it with almond oil and mix this oil to massage the hands, fingers, elbows, knees, and joints of the hands.

Sometimes the whole face, jaw feels a little sore. In this case, apply a little olive oil on the fingers and lightly rub your cheeks, jaws, and the upper part under the nose just like a facial massage. Gently massage with fingers on the face, especially the cheeks from bottom to top. Doing this at least once a day for ten to fifteen minutes gives you a feeling of relief from tiredness, stress, pain, and discomfort.