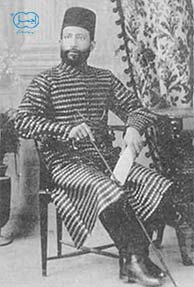 Some personalities are such that their contemporaries do not know their intelligence and outstanding ability. People of later times judge the height of his personality by his deeds and sincerity. Masih-ul-Mulk Hakim Muhammad Ajmal Khan’s personality is prominent in Indian Unani Physicians.

Ajmal Khan was not only a renowned physician, but he also took an active part in the Independence Movement of Hindustan. However, the British, while acknowledging the medical prowess and humility of Hakim Ajmal Khan, had bestowed him honorable titles like “Qaisar Hind” and “Haziq-ul-Mulk”. But hats off on the patriotism of Hakim Ajmal Khan that he returned these titles back. Then, the people of India gave him the title of Masih-ul-Mulk, after inspired by Hakim Sahib’s work. World Unani Day has observed on 11th February of every year. This day is commemorated every year to mark the birth centenary of Hakim Muhammad Ajmal Khan.

He was a well-known Unani physician, surgeon, and researcher, and a multitalented genius, a great scholar, a social reformer, a renowned freedom fighter, a medical educationist of Unani Tibb, and founder of scientific research in the Unani System of Medicine. He was one of the founders of the Jamia Millia Islamia in New Delhi.

Hakim Muhammad Ajmal Khan was born on February 11, 1868, in a distinguished Sharif Manzil in Delhi. He passed away at Rampur on December 29, 1927, at the age of just 59 years. He spent almost 40 years of his life in the service of the Muslims. Every year on the 11th of February, World Unani Day is celebrated for his remarkable work in Unani Tibb.

Hakim Ajmal Khan’s family is the same historically famous family that is well known as the Sharifi family.

He had completed philosophy, physics, hadith, Tafseer, and Jurisprudence till the age of eighteen. In addition to being a Hafiz of the Quran, he was a high-ranking calligrapher, writer, and poet in Urdu and Persian languages.

He excelled in Arabic knowledge, literature, and meanings. Hakim Ajmal Khan was not only an Arabic scholar, but he was also an eloquent and writer of the Arabic language. In religious sciences, he was well acquainted with Hadith, Fiqh, Tafsir, and Kalam. He was a strong believer of Hanafi jurisprudence and practiced it. Although his knowledge of English was limited, he could communicate in English fluently.

Hakim Ajmal Khan used to write poetry in Urdu, Persian, and Arabic. In some of Hakim Sahib’s ghazals, his poetic name is “Hafiz”, but later he became known as “Shaida”.

He read the early books of Tibb from his father Hakim Mahmood Khan and the final books from his elder brother Hakim Abdul Majeed Khan. At the same time, he learned the art of pulse reading, clinician, and prescription writing, which is a must for a Hakim.

Hakim Ajmal Khan was basically a physician. He inherited the profession of the healing art. Hakim Ajmal Khan used to see many patients in his Matab. Patients not only came to visit his Matab from Madras, Bombay, and Burma, but also from Iran, Iraq, Afghanistan, and Turkestan. A great feature of his Matab was that, rich and poor, Hindus and Muslims were treated equally. 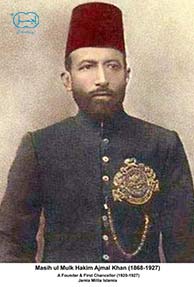 Hakim Sahib was one of the major supporters of Hindu-Muslim unity. He established a college called Ayurvedic and Unani Tibbia College at Karol Bagh, New Delhi. This college was inaugurated by Gandhi. You could have named the college Unani and Ayurvedic. But his far-sighted eyes had realized that if unani was combined with Ayurveda, this Tibb would continue to progress in the future as well.

He also said this in a meeting that, I interpret it as the misfortune of the country that all the work of Hindus and Muslims in India are separate. Aligarh College and Banaras College are also not considered far from this separation. It is unfortunate that the two great nations of the country have taken separate paths in all their affairs. In that case, don’t you think that on the stage of this conference. These two nations come together to work for the survival and betterment of Ayurvedic and Greek medicine? Imagine how useful this process is for indigenous medical sciences and how useful it is for the country. Is it any wonder that the joint work of this conference is being imitated in other works as well?

The well-known political and social life of Hakim Ajmal Khan gave him less opportunity to write and compile. However, whatever is written on Tibb is important. During his stay in Rampur, he wrote several books. Since he was interested in writing from the very beginning, he wrote a magazine in Arabic called “Al-Qawl Al-Marghoob Fi Alma Al-Mashroob” in the time of education.

He wrote a research journal in Urdu when the plague broke out in India from 1895 to 1899. In which the historical conditions, causes, and symptoms of the plague were listed, and finally the methods of treatment were written in great detail. He wrote a book, “Risala fi Tarkib al-Adwiya wa Istikharaj al-Lughat al-Tabiya”, which details the preparation of compounds and the identification of ingredients.

Haziq is the medical work of Hakim Ajmal Khan. In fact, Haziq is a summary of Unani Medicine and a complete cure for the Sharifi family. Hakim Ajmal Khan had also written commentary of Sharah Asbab. He was a well known physician of his times and Indian Government celebrated World Unani Day on his birthday.

Movement for the Protection of Unani Medicine

One of the great manifestations of Masih-ul-Mulk was that he did not reject medical science from the West. In fact, he also focused on reviving the centuries-old traditions of Unani Medicine, education, and training.

Hakim Ajmal Khan, on the one hand, launched a major movement for the protection and development of indigenous medicine in the country. He visited the United Kingdom, France, and other countries and studied the standard institutions and methods of teaching and research of modern medical sciences.

After his return to India, Masih-ul-Mulk devoted all his attention to the standardization, research, and pharmacology of Unani Medicine. Hakim Ajmal Khan established the Unani and Ayurvedic educational and research institute. These institutions are still known to the world as Ayurvedic and Unani Tibbi College.

Hakim Ajmal Khan established a great pharmaceutical company called “Indian Pharmacy” which is unique in the whole country. This pharmacy was established in 1903.

On 29 March 1916, Lord Hardinge laid the foundation stone of the Tibbia College. From then on, Hakeem Ajmal started constructing college buildings. The building was completed in five or six years.

Hakim Ajmal Khan established a Tibbia College. Both of these institutions were established with his own efforts and capital. This college is still a matchless institution in the country.

On the occasion of the centenary of Hakim Ajmal Khan, Aligarh University decided to name Tibbia College after him in recognition of his great services. Additionally, 11th of February is also named after Hakim Ajmal Khan as World Unani Day.