Tuberculosis (TB) is an airborne infectious disease. TB usually affects the lungs and it is caused by Mycobacterium tuberculosis bacteria. TB is a major health problem worldwide, which causes health problems among millions of people every year. The disease is commonly caused by infection of the lung with Mycobacterium tuberculosis. In the Unani System of Medicine, tuberculosis is also known as Diq or Sil. Both these unani terms are considered synonyms. Sil means emaciation and Diq mean the low-grade fever or Humma-e-Diq.

Tuberculosis can cause infection in any part of the body, but most frequently occurs in the Lungs and is called Pulmonary TB. Extrapulmonary TB happens when tuberculosis infects outside of the lungs, although extra pulmonary TB may exist with pulmonary TB simultaneously.

The tuberculosis disproportionately affects the unprivileged persons in both developed and developing countries. The recent research in diagnostics, drugs, and vaccines and increased implementation of present interventions have enhanced the prospects for better clinical Care and worldwide tuberculosis control. (Jamil et al., 2005)

TB is the ninth leading cause of mortality throughout the world and the prime cause from a one infectious causative agent, ranking above HIV/AIDS.(Anjum, 2019) According to the trusted source of World Health Organization (WHO), 1.5 million people died from tuberculosis in 2020. Moreover, tuberculosis is also the 13th leading cause of mortality worldwide. At present,  after COVID-19, TB is the second main infectious cause of mortality. In developing countries TB is most common disease, however in 2020 more than 7,000 cases were reported in the United States according to the Centers for Disease Control and Prevention (CDC).(Nall, 2021)

Drug-resistant TB is another continuous threat, with 490k cases of multidrug-resistant. China, India, and the Russian Federation are the countries with the highest numbers of MDR/RR TB cases which are 47% of the global total. Moreover, human cost, makes tuberculosis the main burden on the socio-economy. In this regard, the World Health Organization declared tuberculosis a global emergency in 1993.

Concept of TB in the Unani system of medicine

The ancient Unani system of medical literature has multiple citations on tuberculosis of the lungs. Since 460 BC, the time of Hippocrates the presence of the disease is distinguished by fever, cough, wasting, and sputum. The ancient Unani physicians named tuberculous as Sil and Dique and explained tuberculosis separately under both headings keeping the uniformity in terminology and nomenclature. Sil and Dique, terms are said to be synonyms, Sil means emaciation and Dique means the low- grade fever (the fundamental symptoms of the disease). Sil is defined as a disease in which the organs get thin and lean and may occur with or without ulcer/Qarha. Sil that occurs with an ulcer is known as huma-e-dique (tubercular fever).

Sil has also been expressed as wasting as emaciation is a special feature of TB and ulcer means damaging and discontinuity of mucus wall and formation of pus. The symptoms of the disease appear because of ulceration of the lungs. The patient has clinical features like fever and expectorates pus with cough. Lungs also get injured in sil. 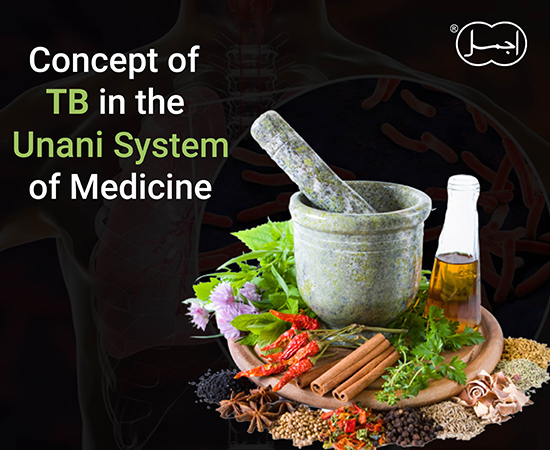 Some of the Unani scholars introduced the term Aqtiqoos as another meaning of sil and have also called the fever Dique as Aqtiqoos. Dique means softness and leanness. It got its name as it is a low-grade fever that tends to lean. Dique and sil are in f terms of the same illness. In 460 BC, Buqrat the father of medicine also think of these names as synonymous. Huma-dique is the uncommon and unnatural temperature that steadily damages the organs of the body (Aaza asliya) and destroys the fluids produced by the body.

According to Ibne Zohar, tuberculosis occurs when the body becomes very thin, weak, k, and dry of body fluid. Commonly Diq occurs when Aazae aslia (vital organs) become Har yabis (hot & dry). According to Ismail Jurjani, Diq is a fever caused by unusual heat (Hararate ghariba), when this heat is related to vital organs, especially the heart then it dissolves the Rutoobate tabayee (normal body fluids) of the human body which results in Diq.

Popular Unani scholar Razi said that Diq is caused by pleurisy, inflammation of the diaphragm and lungs, and pneumonia. Unani scholars have also distributed the causes of Sil into Asbab Sabiqa (preceding causes) and Asbab Badiya (extrinsic causes). Preceding causes are

Unani scholars have also given stressed predisposing factors, for example, chronic diseases and environmental factors such as congested areas, crowded places, and deficiency of fresh air. It has also been believed that whenever changes happen in air or water and get contamination occurs,  they result in the sepsis of humors (Uffonat-e-akhlaat) and thus resulting in the disease.

Ahmad Bin Muhammad Tabri has also described the following disorders under the head of vulnerability, which results in Sil, if not managed properly:

In tuberculosis abnormal heat (Harart-e-Ghair Tabayee) stays in the body to such an extent that causes the body fluids to dry up. The Unani physicians have divided the body into three parts: Organs (Aza), Humours (Akhlat), and Pneuma (Arwah) and state that unusual heat (Hararat-e-Ghair Tabayee) remains in the organs and can dry up all the body fluids, especially of vital organs (Aaza-e-Aslia) in TB. This abnormal heat also causes a kind of fever called Huma-e-diq or tubercular fever.

According to the Unani System of medicine, the class of tuberculosis depends upon the dissolution of body fluids (Tahallul Rutoobate badania).

Majoosi stated that there are three grades of Diq i.e.

Sings in Second and Third Stage:

In addition to this, Razi and Ibn Sina have described the  following sign and symptoms in the Second Stage:

Along with basic symptoms, TB that reaches other organs can also cause:

TB can be diagnosed by health care professionals with a few different tests, that include a skin test, a blood test, or both.

The patient may need both if:

A false-negative result can occur because of the immune system malfunctioning or if it’s been less than 8 weeks since exposure to TB.

The doctor can use a purified protein derivative (PPD) skin test to determine if the patient has acquired TB bacteria.

For this test, the doctor will inject 0.1 milliliters (mL) of PPD (a small amount of protein) under the first layer of the skin. In a missle of 2 and 3 days later, the patient will return to the doctor’s office to have the results read.

To follow up on TB skin results the doctor can use a blood test. If a person has an existing disease that may suffer response to the skin test the doctors may also recommend a blood test first.

The two TB blood tests Quantiferon and T-Spot are currently approved in the U.S. Results of Blood tests can be positive, negative, or indeterminate. Like the skin test, the blood test is unable to indicate whether you have active TB disease or not.

If the doctor gets a positive result from the skin or blood test, he will likely order a chest X-ray to look for some small spots in the lungs. These spots are a sign of a TB infection. These spots indicate that the body is trying to isolate the TB bacteria.

A negative chest X-ray may suggest latent TB, but it’s also happened that the results were not correct. The doctor may suggest another test.

If the test reports that the patient has active TB disease, he will start treatment for active TB. Otherwise, the doctor may suggest getting treatment for latent TB. This can prevent the reactivation of bacteria and cause sickness in the future.

The healthcare professional may also recommend tests on sputum or mucus which is extracted from deep inside your lungs to test for TB bacteria. If the sputum tests positive, this infers that TB bacteria can be transmitted to others. The patient will need to wear a special mask until after the commencement of treatment and the sputum tests negative for TB.

Patinet may need other tests as well, such as a chest CT scan, bronchoscopy, or lung biopsy, if the above described test results remain unclear. (Nall, 2021)

According to Unani Concept, diagnosis of TB is done with help of the following points.

The most predominant physician Ibn Sina and Ibn Rushd described that the temperature of the tubercular person (Madqooq) stays constant and does not change but on taking a meal, the temperature increases and the pulse becomes Pulsus Fortis and Magnus (Qawee and Azeem)

Ibn Hubal Baghdadi has described temperature increment after having a meal as a pathognomic sign.

Following Unani therapies are used for the management of tuberculosis:

Unani physicians have put stress on the betterment of the resistance of the patient to fight the disease successfully. That is why they have emphasized n nutritious diet, especially a protein-rich diet. Most of the Unani physicians suggested:

According to different stages of TB, the diet should include:

First Stage: In the first stage barley water (Maaul Shaer), fish kebab, and other vegetables like Kanocha (Phyllanthus maderaspatensis), Khurfa (Portulaca oleracea), Kadu (Cucurbita moschata) should be given to the patient.

Second Stage: In this stage, the diet mentioned above should include donkey’s milk, goat’s milk, meat stock (Maaul leham), etc.

Third Stage: If TB progresses into the third stage the patient is skinny and is extremely weak then easy to digest diet should be given like soup of bird meat, chicken soup, etc.

Following are the non-pharmacy therapeutic methods described by Unani scholars:

During the treatment of a Sil patient, Unani physicians have emphasized mucolytic, desiccants, and healing agents.

Following prescription is also effective in controlling the cough, hemoptysis, and healing of ulcers in the management of tuberculosis:

10 gms of Gond Kateera(sterculia Uranus), 10 gms of Rubbus Soos (Glycyrrhiza glabra), 10 gms of Shakr Tighal-(Tigril’s cocoon), 0 gms of Kahrubai Shamai (Ambreskenum) fine powder of these drugs combined with 10 gm Khameera khshkhash (Papaver somniferum) and after this process give it to the patient.

Even if there is a low risk of TB around you, you should always need to be familiar with the measures you can take to prevent contracting the TB bacteria or transferring the infection to others.

Following are the few important steps you can take to prevent TB infection: 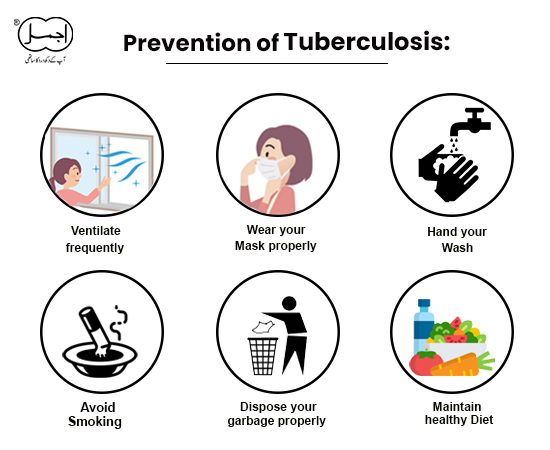 If people with active tuberculosis don’t take measures, they can spread the bacteria that causes the infection to between 10 and 15 people every year through close contact, according to WHOTrusted Source.

These methods can help prevent the spread of tuberculosis:

In the end, tuberculosis can be treated and healed, but it’s always ideal to get started as soon as possible.

If you think you’ve been exposed or are at a higher risk of infection due to a medical condition or where you work or live, talk to your doctor about what to do next.

The bacillus Calmette-Guérin (BCG) vaccination is primarily utilized in countries with a high prevalence of tuberculosis. This vaccine is more effective in children than in adults.

Because the danger of tuberculosis is low in the United States, it is not frequently utilised. In addition, the vaccine may interfere with TB skin testing, resulting in a false-positive result. (Nall, 2021)

UM, R. 2019. A review of Tuberculosis (SIL) with special reference to Unani medicine. Journal of Drug Delivery and Therapeutics, 9, 760-762.